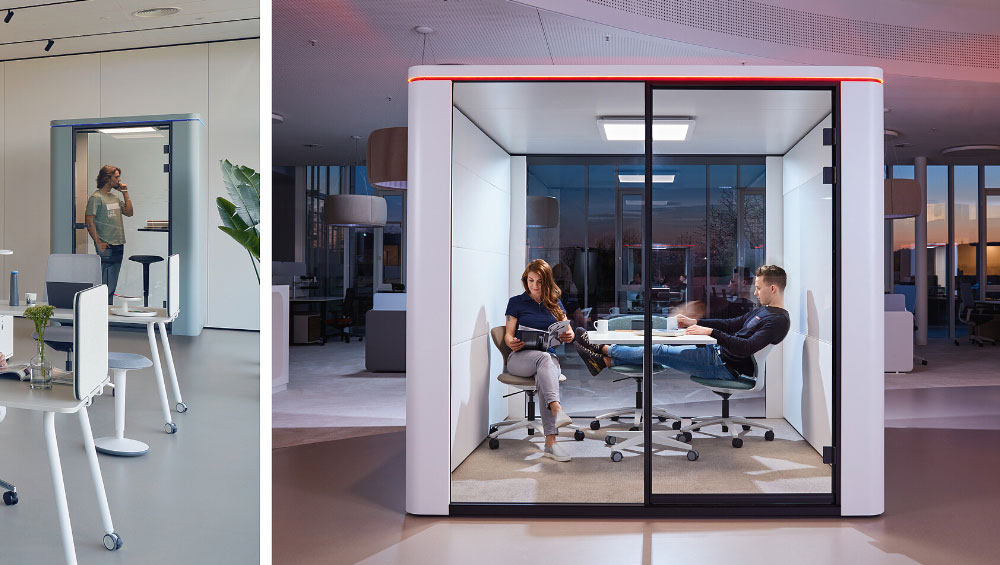 Ask most office workers what they find most annoying and unproductive about their workplace and they’re most likely by some distance to suggest that it is sound, closely followed by the related issue of visual privacy.. The issue has intensified over the past few years with the proliferation of mobile devices and as the amount of space allocated to each person has fallen substantially. By most estimates, including the BCO’s specification guide, space allocation per person has dropped by over a fifth within the space of ten years, in part because of the use of said devices rather than bulky desktop computers, but also because of the greater use of shared space.

Research published recently by Oxford Economics found that more than half of employees say poor office acoustics reduce their productivity. As a result, many feel compelled to solve the problem themselves, blocking out distractions through visits to break-out spaces, taking walks outside, or listening to music on headsets or headphones. This latter solution also works as a clear ‘do not disturb’ sign, especially when displayed by a pair of bulky cans rather than discrete earbuds.

By contrast, people working undisturbed are as much as 56 percent more productive according to a study of 13,000 employees carried out in the US by John Olson of BOSTI Associates. It found that the single most important factor in determining productivity was the ability to do distraction-free work.

The most common response to all of this is to blame the use of mobile phones, the near universal use of open plan and the constriction of personal space in modern offices. This is an intuitive idea and in many ways well founded, but what we now know is that volume is not the only factor in how we respond to sound. The problem is in our minds as well as our ears.

A 2015 meta-analysis of over a hundred research papers carried out by the environmental psychologist Dr Nigel Oseland found that just 25 percent of the effect of noise in the office could be attributed to its volume. More than half of the effect is due to psychological factors such as context and attitude, perceived control and predictability and personality type. “Noise is a psychophysical phenomenon”, he wrote, “and as long as we continue to focus on physical metrics and disregard the psychological component, we will never resolve the biggest and often ignored problem of noise in the workplace.”

This is not a new idea. It’s one that is ignored. Donald Broadbent was a researcher who died twenty years ago. His research into cognitive psychology predicts the effects of unwelcome noise in offices. This revealing BBC programme explores some of his ideas, especially the idea he called The Cocktail Party Effect, which now comes under the rather less romantic heading of psychoacoustics. It encapsulates the notion that the source and predictability of a sound and our control over it are just as important in the way we respond to it, as its volume.

Other research into the same idea includes a study published in the British Journal of Psychology which highlighted the role that ‘irrelevant noise’ plays not only in disrupting work, but also in increasing stress levels and decreasing job satisfaction.

Similarly, the Scandinavian researchers Anders Kjellberg and Bertil Nordstrom found that sudden noise was far more distracting than constant background noise, which explains why interruptions may be more of a problem in a relatively quiet office than in a noisier contact centre. They also found that the noise of office equipment is only annoying for people not using them.

What such studies confirm is that by focussing solely on the issue of volume, we may be ignoring the most interesting and complex facets of acoustic design and privacy in the workplace. Indeed, making offices too quiet also be counterproductive, especially if we are looking to create a workplace with a buzzy culture. Because sound has both physical and psychological characteristics, the office design solutions to the problem of noise and distractions must be sophisticated and adaptable, reflecting the culture of a workplace and the characters of the people working in it.